I’m not saying a woman who gives birth to a 10 lb. heifer doesn’t deserve all our utmost admiration, because she DOES, I’m sure of it.

But us Tiny Baby Moms have our own shit to deal with.

Like round-the-clock heel pricks on your tiny, terrified newborn. Once an hour, for at least the first 24 hours. Brutal.

And the weight checks—oh, the endless, anxiety-inducing weight checks! Once a week or maybe every other week (if you’re lucky), you load up your itty-bitty baby into the car seat, drive 10 miles an hour to the doctor’s office (because you’re convinced your 5-pound baby isn’t safe in that ginormous car seat), and you just pray he met his goal weight.

And if he didn’t, then hold onto your britches, because hell hath no fury like a breastfeeding mama scorned.

You mean to tell me, I’ve been nursing this little baby Skeletor every two hours on the dot, round the clock, and he only gained 4 ounces?! Aw heeeeellll no… *burns down pediatrician’s office*

I mean where is it all going? They’re drinking the milk, right?

So you pump and bottle feed to measure the ounces precisely, and get buried alive in pump parts and bottles, and get so deliriously sleep-deprived that your pump starts talking to you in the middle of the night.

And then, you have to watch your tiny baby spew that precious hard work right back out, because, oh yeah:

THE REFLUX. The life-ruining, destroyer of dreams, thief of joy that is reflux. GERD, as the doctors call it.

Sure, big babies get reflux too, and it’s just as hard on them. Tiny babies are just much more prone to it. Reflux is an evil demon that lives inside your newborn until he literally pukes it out, hopefully after a few months.

You will throw all your crunchy mama aspirations out the window when your tiny baby is suffering from reflux.

“I’m not medicating my baby until he’s at least a year old!” turns into “please dear god, what can I pump into him to make the screaming stop.” So just give into it, and get your tiny baby some relief.

If you can get the reflux under control, you’ll have a fighting chance to upgrade your newborn from baby Lord Voldemort status to, like, hairless Sphynx cat status. And if you’re really lucky, you’ll get him to sweet cherub baby status in time to actually wear some of his clothes before they go out of season. 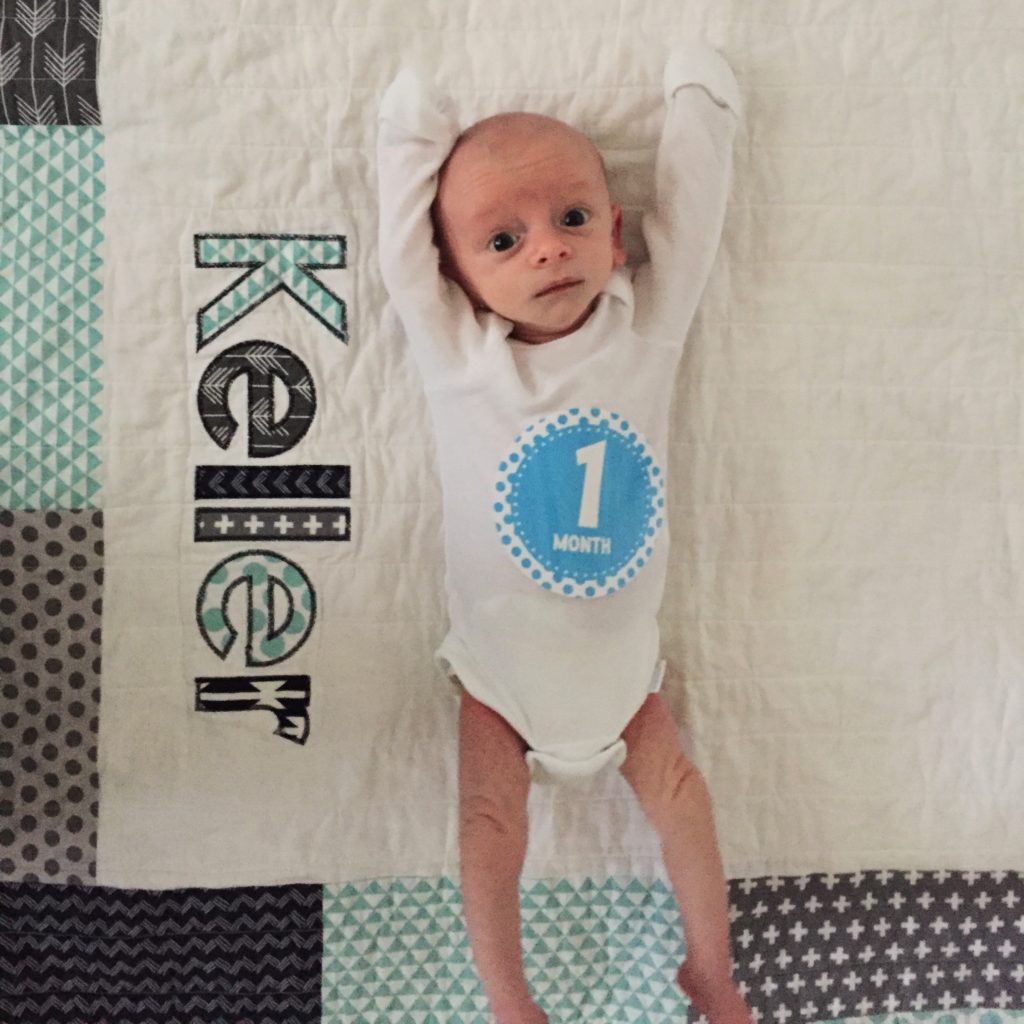 Because more than likely, if you’re anything like me, you bought, washed, and organized a whole wardrobe of outfits for your little babe while you were still pregnant, blissfully ignorant to the tininess in your future.

And then you birthed a skinny little praying mantis of sorts, and nothing fit him. The Newborn outfits that everyone told you would only last a week before baby outgrew them swallowed your baby up for months. So by the time he fits into the adorable 3-6 month cozy Christmas outfit you’d planned, it’s March.

Just embrace it, and have yourself a Christmas in March party. When you look back at the pictures in 10 years, you’ll never remember that it wasn’t actually Christmas, because motherhood eats your brain from the inside out.

But trust me that one day, you’ll go to the pediatrician, and your arms will be sore from lugging around your beast of a baby, and that little chunk will be in the 80th percentile, and you won’t even know what to do with yourself, you’ll be so proud. You’ll want to toss him in the air to celebrate, but you won’t be able to because he’ll weigh 25 pounds, and you’re not a damn body builder.

So hang in there, snuggle your little string bean, and enjoy these sweet days for what they are – rewarding (just go with it). 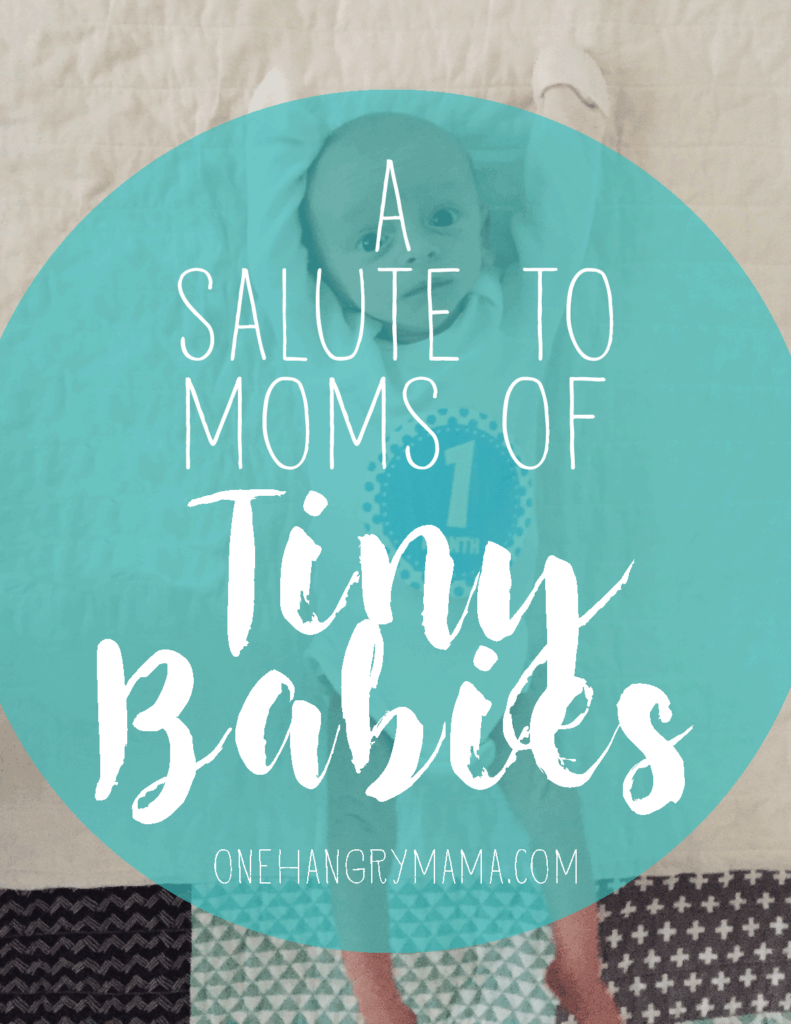 YES! THANK YOU!!! Always with the "Oh, he's so small" and "what percentile is he?" I just want to be like stfu b****! My 5lb 12oz little bundle is going to grow up to be a big strong man so settle the eff down! They unintentionally make us feel like we are malnourishing our child so we spend endless days/nights crying and feeling like giving up our breastfeeding journey just so we can pack on some pounds with formula (not that there's anything wrong with formula). Well, my baby is now 16months and still in the 10th percentile but I don't even care anymore because he eats like a full grown man and sleeps 13 hours at night! But most importantly, he's happy, healthy and brings so much joy to this world :) Thanks for this article

Yes yes yes! You're doing a great job. And for the record – my once 5lb, 12oz pipsqueak is now a 5-year-old MONSTER. He's in the 89th percentile for weight now, and literally all he does is eat. It all catches up eventually! Happy & healthy is ALL that matters... the rest will follow.

This post gave me life, I swear. My little girl was 3 wks early and she was 5lbs 11oz. I thought we would break her every time we held her. She gained weight really quickly, luckily, which I attribute her stay in the NICU and being formula fed.

I've never experienced this myself, as my children were rather big. I appreciated your candid and somewhat eye-opening perspective. All the best to you and your family :)

What a beautiful tribute. I had no idea what moms of tiny babies go through.

I love how open & honest you were in this post!! I can only imagine how hard it is to see your baby go through that and not know what to do to help him. So glad he's gaining weight now, though! <3